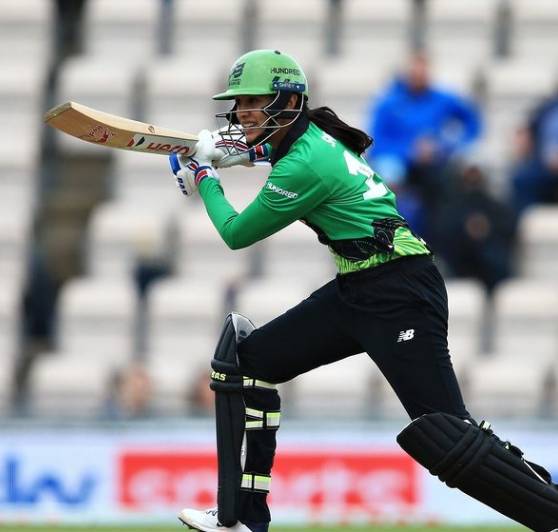 The left-hander took Sydney Thunder within one six of pulling off a remarkable victory against Melbourne Renegades, but she was unable to hit the maximum required from Harmanpreet’s last delivery

Smriti Mandhana on Wednesday became the first Indian to hit a century in the Girls’s Large Bash League with a record-equalling 114 not out however her splendid effort went in useless as her facet Sydney Thunders lost the match.

Mockingly, Mandhana could not pull off a successful six in the final ball off India T20 captain Harmanpreet Kaur as Melbourne Renegades won the match by 4 runs to ship Sydney Thunder out of reckoning of the ultimate.

The left-hander took the Thunder inside one-six of pulling off an outstanding victory towards the Renegades, but she was unable to hit the maximum required from Harmanpreet’s last delivery as her staff finished on 171/2.

The defending champions wanted an upset win to keep their slim finals hopes alive, they usually had a less-than-ideal begin with Sammy-Jo Johnson (12) and Phoebe Litchfield (1) dismissed contained in the powerplay.

Discovering a secure partner in Tahlia Wilson (38 not out from 39 balls), Mandhana posted her third fifty of the season from 33 balls. But the asking price was climbing with 63 runs wanted from the last 5 overs.

Mandhana shifted gears as she took 24 runs off Holly Ferling within the 18th over. She then introduced up her century in 57 balls however there was nonetheless work to do as 22 runs had been needed from the ultimate two overs.

Mandhana, who was the beneficiary of two fielding errors, ultimately failed to hit the last-ball six required to finish what would have been a well-known victory.

Earlier, Harmanpreet top-scored for the Renegades, who had been requested to bat first, with a 55-ball 81 not out with the assistance of 11 fours and two sixes.

She shared a 91-run stand for the third wicket with English batter Eve Jones (42 off 33 balls). One other Indian, opener Jemimah Rodrigues was out for 2 within the first over.