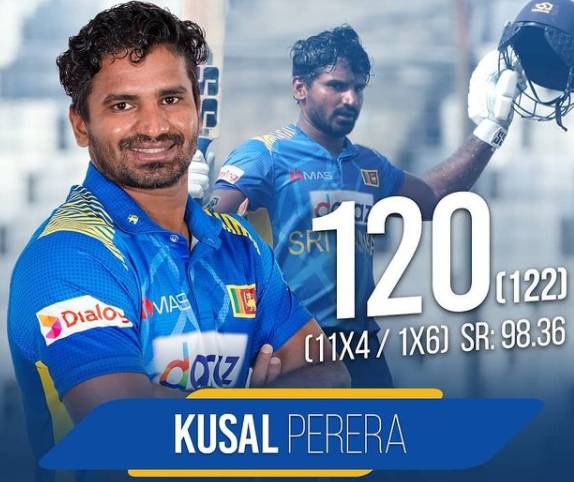 Kusal Perera’s sixth ODI hundred set up Sri Lanka for a 300-plus total but Bangladesh pulled things back in the last 10 overs to keep them to 286 for 6. After Perera made 120, Dhananjaya de Silva struck an unbeaten 55 off 70 balls.
Fast bowler Taskin Ahmed took 4 for 46 from his nine overs, including the first three wickets to fall. Meanwhile, for Shakib Al Hasan, the wait to become Bangladesh’s highest ODI wicket-taker is set to continue for another two months after Perara was dropped twice off his bowling. He went wicketless.
Perera was dropped thrice, first on 66 when Mustafizur Rahman couldn’t hold on to a reverse sweep off Shakib at the point. Then, Afif Hossain dropped him running back from mid-on on 79, Shakib the unlucky bowler again. Then On 99, Mahmudullah dropped him at mid-off. He got to his hundred, his third against Bangladesh, off the next delivery.
Perera struck eleven fours, only two of which were his signature cover-driven boundaries. The majority of his fours came square on the leg side, as he hit six fours between square leg and fine leg, while his only six was a mow over midwicket.
Perera and Danushka Gunathilaka got Sri Lanka off to their brightest start in the series, hitting seven fours in the first five overs. Gunathilaka started off with a cracking cover drive off the first ball of the match, before Perera took on the role of the aggressor. The momentum took them to 82 in the 12th over before Ahmed, brought back for his second spell, dismissed Gunathilaka for 39. Until then, the opener had looked in control.
Later in the same over, Ahmed got Pathum Nissanka caught behind for a duck, but the twin blows didn’t quite derail Sri Lanka. Perera reached his fifty in the 16th over, consolidating the innings with his deputy Kusal Mendis. The third-wicket pair added 69 runs in the next 13.2 overs, with Perera dominating the partnership.
Mendis hit just a six in his 22 off 36 balls before skying one to Tamim Iqbal at mid-off. Iqbal had brought on Ahmed in search of a wicket around then and the fast bowler repaid that faith.
Sri Lanka’s scoring rate however dipped around this stage despite Perera and Dhananjaya de Silva adding 65 for the fourth wicket. Both batters tried to take their stand into the last 10 overs, but Perera fell to a tired shot off Shoriful Islam in the 40th over. Shortly afterward, Niroshan Dickwella, one of four changes in the XI for this game, was run out for seven.
Sri Lanka managed 69 runs in the last 10 overs. From the 39th to the 45th over, they could find a single boundary. It wasn’t until the 18-run final over, bowled by Islam, that they took their score close to the 300-run mark. de Silva struck four boundaries in his half-century.
Read also-Really unpredictable’: Chinese rocket hurtling back to Earth; possible debris zone spans an enormous swath of the globe