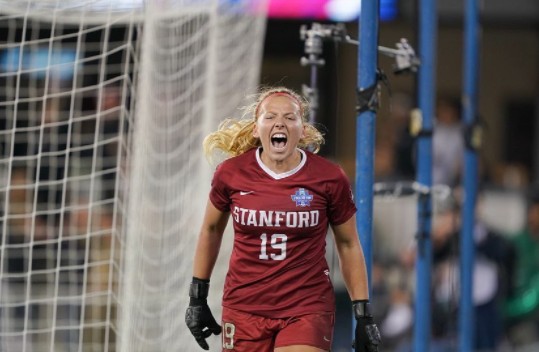 Katie Meyer, a senior at Stanford and a goalkeeper and captain on the Stanford girls soccer team, died Tuesday in a campus residence. She was 22.

Stanford Vice Provost for Student Affairs Susie Brubaker-Cole and Athletic Director Bernard Muir confirmed the news in a message to students, school, and staff on Wednesday after an initial report Tuesday didn’t identify Meyer out of respect for the household’s privacy.

The school didn’t reveal the reason for death.

Meyer was an International Relations main and History minor at Stanford. A 3-year starter on the Cardinal girls’ soccer workforce, Meyer made two vital saves in a penalty shootout against North Carolina in 2019 to assist Stanford to win its third NCAA championship. She was a two-time Pac-12 champion, a member of the 2019 College Cup All-Match team, and a two-year captain.

“Katie was extraordinarily committed to all the pieces and everyone in her world,” Brubaker-Cole and Muir wrote.

“Her pals describe her as a larger-than-life workforce player in all her pursuits, from choosing a tutorial discipline she mentioned ‘modified my perspective on the world and the very important challenges that we have to work together to beat’ to the fervor she delivered to the Cardinal girls’ soccer program and to girls sports in general.”

Throughout her time at Stanford, Meyer served as an intern at Just girls Sports and was a member of JWS’ inaugural Varsity Squad.

A local of Burbank, Calif., Meyer is survived by her parents, Steven and Gina, and her two sisters, Samantha and Siena.

Stanford counseling employees have been on site on the residence hall and are working with student-athletes on campus, Brubaker-Cole, and Muir mentioned.

“Just girls Sports is heartbroken to learn of the passing of Katie Meyer. With each interplay, we felt her ardor, charisma, intelligence, and humor. Katie was a tremendous leader, a nationwide champion, and somebody whose energy impressed everybody she knew.

“Katie was one of the first athletes we interviewed when JWS began in 2020. She went on to turn into an intern with us and was a priceless member of our firm’s team. The impact she made will always be with us.

“All of our ideas are with her household and friends.”